8 Reasons a Huge Gold Mania Is About to Begin


I’m not talking about a garden-variety cyclical gold bull market, but rather one of the biggest gold manias in history.


This gold mania will be riding the wave of an incredibly powerful trend… the re-monetization of gold.


The last time the international monetary system experienced a paradigm shift of this magnitude was in 1971.


Today, gold is still bouncing around its lows. Gold mining stocks are still very cheap. I expect returns to be at least as great as they were during the last paradigm shift.


So let’s get right into it, starting with the first four catalysts that will send gold prices higher…


The Bank for International Settlements (BIS) is located in Basel, Switzerland. It’s often referred to as “the bank of central banks.” Its members consist of 60 central banks from the world’s largest economies.


The BIS also issues Basel Accords, or a set of recommendations for regulations that set the standards for the global banking industry.


Buried among what was mostly confusing jargon was something of huge significance for gold:


What this means in plain English is that gold’s official role in the international monetary system has been upgraded for the first time in decades.


Banks can now consider physical gold they hold, in certain circumstances, as a 0% risk asset. Previously, gold was considered riskier and most of the time could not be classified in this way. Basel III rules are making gold more attractive.


Central bankers and mainstream economists have ridiculed gold for going on 50 years now.


The fact is gold is real money… a form of money that is far superior to rapidly depreciating paper currencies. This is why central bankers don’t want to acknowledge how important it is.


And this is precisely why Basel III is important. It signifies the start of a reversal in attitude and policy.


Basel III is giving gold more official recognition in the international financial system. It represents a step towards the re-monetization of gold… and the recognition of this powerful trend in motion.


No. 2: Central Banks Are Buying Record Amounts of Gold


In 2010, something remarkable happened. Central banks changed from being net sellers of gold to net buyers of gold. Remember, central banks are by far the biggest actors in the global gold market.


This trend has only accelerated since…


The World Gold Council reports that in 2018, central banks bought a record 651 tonnes of gold. This is the highest level of net purchases since 1971 when Nixon closed the gold window. And it’s a 75% increase from 2017. 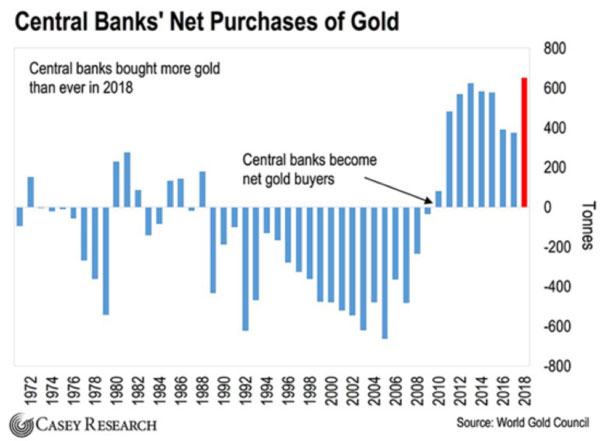 Russia Was the Biggest Buyer


Russia’s gold reserves have quadrupled in the last decade, making it the fifth-largest holder of gold in the world.


Last year, Russia notably dumped nearly $100 billion worth of U.S. Treasuries, and, according to the World Gold Council, replaced much of it with gold.


If this trend continues, and I expect that it will, Russia will soon become the third-largest gold holder in the world. 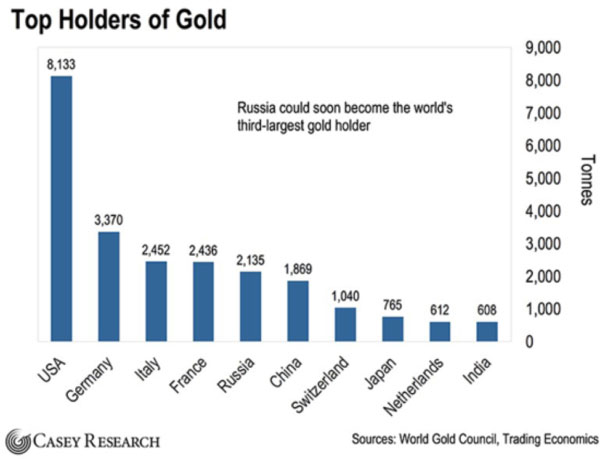 A major reason for Russia’s gold purchases is to reduce its reliance on the U.S. dollar and exposure to U.S. financial sanctions.


It is providing a template for others to do the same, using gold as money.


For example, in 2016, news broke that Turkey and Iran were engaged in a “gas for gold” plan. Iran is under U.S. sanctions. Through the plan, Turkey can pay for gas imported from Iran with gold.


Russia, Iran, Venezuela, and others are proving they don’t need the U.S. dollar. They are conducting business and settling trade with gold shipments, which aren’t under the control of the U.S. government.


This is how gold will benefit from the U.S. government using the dollar as a financial weapon.


In 2017, when tensions with North Korea were rising, Trump’s Treasury secretary threatened to kick China out of the U.S. dollar system if it didn’t crack down on North Korea.


If the threat had been carried out, it would have been the financial equivalent of dropping a nuclear bomb on Beijing.


Without access to dollars, China would struggle to import oil and engage in international trade. Its economy would come to a grinding halt.


China would rather not depend on an adversary like this. This is one of the main reasons it created what I call the “Golden Alternative.”


Last year, the Shanghai International Energy Exchange launched a crude oil futures contract denominated in Chinese yuan. For the first time in the post-World War II era, it will allow for large oil transactions outside of the U.S. dollar.


Of course, most oil producers don’t want a large reserve of yuan.


That’s why China has explicitly linked the crude futures contract with the ability to convert yuan into physical gold – without touching the Chinese government’s official reserves – through gold exchanges in Shanghai and Hong Kong. (Shanghai is already the world’s largest physical gold market.)


With China’s Golden Alternative, a lot of oil money is going to flow into yuan and gold instead of dollars and Treasuries.


CNBC estimates that the amount of redirected oil money will eventually hit $600-$800 billion. Much of this will flow into the gold market, which itself is only $170 billion. 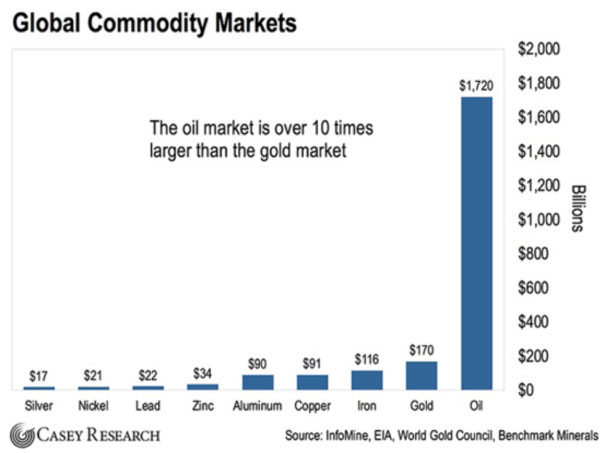 
China is the world’s largest importer of oil.


So far this year, China has imported an average of around 9.8 million barrels of oil per day. This number is expected to grow at least 10% per year.


Right now, oil is hovering around $60 per barrel. That means China is spending around $588 million per day to import oil.


That means every day, China is importing oil worth over 442,105 ounces of gold.


If we’re conservative and assume that just half of Chinese imports will be purchased in gold soon, it translates into increased demand of more than 80 million ounces per year – or more than 70% of gold’s annual production.


This shift hasn’t been priced into the gold price. When it happens, the increased demand for gold from China’s Golden Alternative is going to shock the gold market.


The bottom line is, China’s Golden Alternative is a big step towards gold’s re-monetization.


No. 4: The Fed’s Dramatic Capitulation


In the wake of the 2008 crash, the Federal Reserve instituted several emergency measures. The chairman at the time, Bernanke, promised Congress they would be temporary.


That newly created money was used to buy mainly government bonds, which sat on the Fed’s bloated balance sheet.


The Fed also brought interest rates to the lowest levels in U.S. history. The Fed artificially brought rates down to 0% and kept them there for over six years.


Remember, interest rates are simply the price of borrowing money (debt). They have an enormous impact on banks, the real estate market, and the auto industry, among others.


In 2016, the Fed began its attempt to “normalize” its monetary policy by raising interest rates and reducing the size of its balance sheet to more historically normal levels. By doing so, the Fed was reversing the emergency measures put in place after the 2008 crisis.


Interest rates have risen from 0% to around 2.5%, and the Fed has drained over $500 billion from its balance sheet, or about 11% from its peak.


But then, the stock market tanked…


It was the worst December in stock market history, except for December 1931, which was during the Great Depression.


That spooked the Fed into its most abrupt change in monetary policy in recent history.


Instead of normalizing monetary policy and removing the so-called “temporary” and “emergency” measures in place since 2008 – as it had long planned to do – the Fed capitulated.


Earlier this year, the Fed announced it would not raise interest rates in 2019.


The Fed also announced it would phase out its balance sheet reduction program in the fall.


This whole charade is indicative of how utterly dependent the U.S. economy has become on artificially low interest rates and easy money.


The answer is it can’t and won’t. It’s impossible for the U.S. government to normalize interest rates with an abnormal amount of debt. The Fed is trapped.


After nearly six years of 0% interest rates, the U.S. economy is hooked on the heroin of easy money. It can’t even tolerate a modest reduction in the Fed’s balance sheet and 2.5% interest rates, still far below historical averages.


In other words, this monetary tightening cycle is over. The next move is a return to QE and 0%, and perhaps negative, interest rates. These moves would, of course, weaken the dollar and be good for gold.


By flipping from tightening to signaling future easing, the Fed has turned a major headwind for the gold market into a tailwind.

Money Is Weighed, Fictions Are Counted

I think it will go back up when communists have the presidency again.
All economic systems are capitalist. The only difference is what the capital is.

GOLDZILLA said:
I think it will go back up when communists have the presidency again.
Click to expand...
yep, me thinks you have something there. Me? I know one can lite paper on fire but it takes a lot of wind and burning charcoal to melt the real thing. $850? I remember those days when gold was like deregulated and man did it bounce, thing is today there is more paper out there than metal and paper is made from trees and I burn trees for heat in the winter.
communis error no facit just. A common error does not make law.
P

Peter52 said:
9th reason: gold-backed stablecoin projects are gaining momentum
Click to expand...
It was the 8th one!

8 Reasons A Huge Gold-Mania Is About To Begin

No. 1: Basel III Moves Gold Closer to Officially Being Money Again
No. 2: Central Banks Are Buying Record Amounts of Gold
No. 3: Oil for Gold – China’s Golden Alternative
No. 4: The Fed’s Dramatic Capitulation
No. 5: Takeover Frenzy in the Gold Mining Industry
No. 6: President Trump Is Pro-Gold
No. 7: Socialism Is on the Rise

No. 8: Gold-Backed Cryptos – A Monetary Revolution

The last catalyst for gold is cryptocurrencies backed by gold.
There are dozens of gold-backed cryptos sprouting up.

Peter Grosskopf, the CEO of Sprott, recently called gold-backed cryptocurrencies “the most important thing to happen to the gold market in the last several decades.”

Soon after, Sprott launched a gold-backed crypto it developed with its partners.
When Sprott – a leader in the natural resources industry – makes a big move into the gold-backed crypto space, it’s a definitive sign of where things are headed.

Gold-backed cryptos combine the best attributes of gold and cryptos. I can’t think of two other asset classes that have as many synergies. In other words, the whole is worth much more than the sum of the parts.

With cryptos redeemable for gold, we can now instantly send anyone anywhere in the world small or large amounts of gold – reliably and without interference. It’s nothing short of a monetary revolution.

Gold-backed cryptos are going to make using gold as money even more convenient for the average person and business. Anyone with a cell phone now can use gold in a way that was not possible before.

This is another big reason why I think gold is coming back as money.