DeBlasio At It Again! Lays Minefield To Deter Swimmers 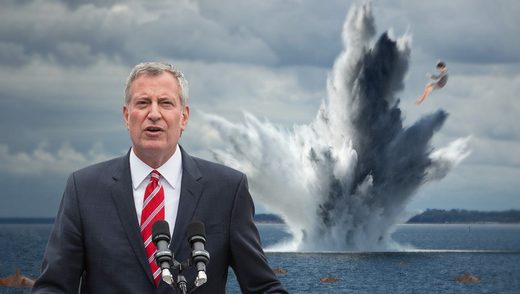 © The Babylon Bee
De Blasio keeps his citizens safe from fresh air and exercise
Mayor Bill De Blasio had a stern warning for beachgoers in the city of New York today: "You will literally get blown up."

The mayor proudly announced that he had the NYPD install a state-of-the-art naval minefield surrounding the city, so that anyone who swims in the water will get flung sky-high.

"To make sure as many people stay alive as possible, we're going to explode you for going out in the water," De Blasio said as he unveiled the official New York minefield. "You go out in the water? Boom! You step on the beach? Yep, more mines. Boom! And if the mines don't get you, the heavy machine guns will."

As he spoke, a hapless swimmer accidentally triggered one of the mines and careened hundreds of feet into the air in hundreds of pieces.

De Blasio has paired the minefield with "impenetrable defenses" on the city's beaches, including pillboxes, hedgehogs, and heavy artillery covering every square inch of New York coastline.

"This 'Atlantic Wall' will keep New Yorkers safe for years to come," he said.

Governments are NOT in the business of solving problems. Their business is to perpetuate, control and profit from problems. For to solve problems would stifle their growth and power.
TAEZZAR
11 Aug 1969

Shit he's crazy enough that I actually believed that was possible for a sentence.
"Education consists mainly of what we have unlearned." - Mark Twain
"Whenever you find Yourself on the side of the Majority; It is time to Pause and Reflect." - M. Twain
"Torn between the political comfort zone of the official story & logic, pushing me into the uncertain and lonely future.." - Andrei Nekrasov

TAEZZAR said:
It's the Babble-on (you silly shit) Bee !!

Click to expand...
Yep! Nothing but the best!
Orthodox Jedi
Make mine a vodka and vicodin latte.
F

I was willing to bet he had cow manure spread on the beaches....when a politician says "No fun allowed", they mean it.
Free America from the real Welfare Queen...Israel.
Free Palestine, give it back to the people who don't need welfare.
Boycott Israel, FREE America. BDS, learn it.

First blush I thought someone is dramatizing Safety Buoys people can put in their untended swimming pools. A splash or someone falls in the buoy sounds an alarm until turned off.
THEN I saw Babylon Bee.
President Trump said — "They’re not after me. They’re after you. I’m just in their way."

"The further a society drifts from truth, the more it will hate those who speak it". Geo. Orwell

"DONALD J. TRUMP a President without a Party but a Nation Has His Back". - Gb

....and a feint ray of light from a single photon burst just went off in Gretchen Dim-Whit's Pea-Sized Brain...."yes, an Atlantic Wall, that will teach those Racist, Domestic terrorist, Nazi Republican Protesters......... and, to stamp out White Privvy, we'll give exemptions to the Muslims and the Poor Opprssed African-Americans, they may swim at their leisure, we'll give them all maps so thay can safely navigate the mines".
You must log in or register to reply here.
Share: Twitter Link