Saudi Policy Hints At The Future Of Oil
By Matthew AshleyCommoditiesApr 05, 2016 12:24AM ET

Most of the market players are now in agreement about the likelihood and efficacy of an oil production freeze. With oil prices taking further plunges to $35.45, it would appear that everyone has given up on hopes of an OPEC-orchestrated freeze. However, some still argue that oil could become bullish once more and reach or break the ever important $50.00 mark on the charts. In contrast, the recent developments in Saudi policy provide all the signals needed to show that high oil prices are a relic of the past. 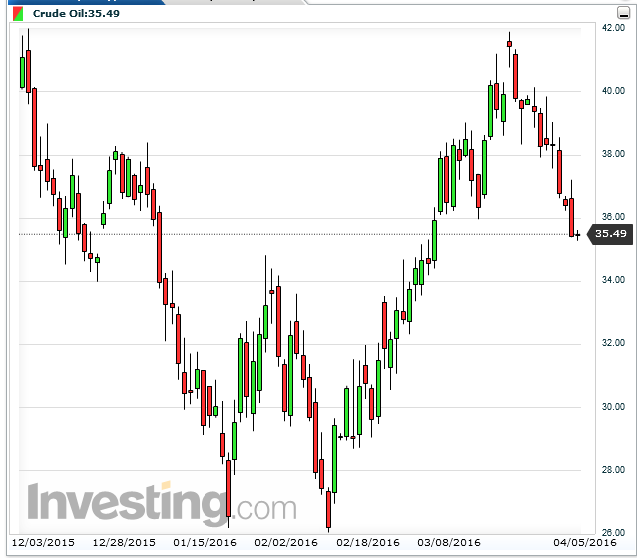 Crude Oil Daily
Firstly, it may appear that the Saudi government is still attempting to artificially inflate the price of oil by minimizing supply by any means possible. With hopes of an OPEC production freeze evaporating rapidly, the Saudi government has resorted to preventing Iranian oil shipments from entering Saudi-controlled waters. Ostensibly, the move is an attempt to thwart the looming excess of oil supply soon to be generated by a newly sanction-free Iran. However, this represents a short-term fix whilst the Kingdom prepares its true response to the oil price crisis.

The Saudi Government knows the future of oil does not include sky high prices and they intend to act before it’s too late. In a recent interview conducted by Bloomberg, Deputy Crown Prince Mohammed Bin Salman outlined the Kingdom’s plans for the future. As a result of the interview, it was revealed that the Saudi government sees the nation propped up more by investment than by oil in the future. In order to achieve this, the government plans to transform its public investment fund into a sovereign investment fund. As described by Bloomberg, the fund would be one of the largest on the planet.

Consequently, the writing really is on the wall for oil prices in the coming years. In a world where US shale oil production effectively provides a strong resistance at the $50.00 handle, the Saudi government knows there is no point holding on to hope that oil can trade above $50.00 for long. As a result, the market needs to come to the same realisation as the Deputy Crown Prince. Specifically, we must accept that low prices are the new normal for oil. However, all this is not to say oil cannot swing between its recent bottom and the $50.00 handle in the short term. For example, only recently we saw the relative efficacy of OPEC scare mongering in pushing oil prices higher. As a result, some short term bullishness could occur now that oil is oversold.

Looking to the future, what is now relatively certain is the market is going to be bearish in the long term. This comes as a result of advances in extraction efficiency which serves to lower the entry point of shale producers into the oil market. Subsequently, these advancements lower the $50.00 resistance zone as shale producers enter at lower prices but remain profitable and challenge other producers more intensely.

Ultimately, the era of high oil prices is coming to an end as a result of gains in efficiency. Reacting to this, the Saudi Government policy moves are giving the market a huge signal to follow suit and get used to lower and lower oil prices. Additionally, OPEC scare mongering and shipping route interference can only inflate prices in the short term. Neither response will be able to restore oil prices to historic levels.

should be a bunch of resistance around that 38 handle

one can even surmise that if the dollar continues to weaken, prices can firm in the oil markets
Sound of Silence