Stablecoins: Bridging the Network Gap Between Traditional Money and Digital Value — Brought to you by GMO Trust​ 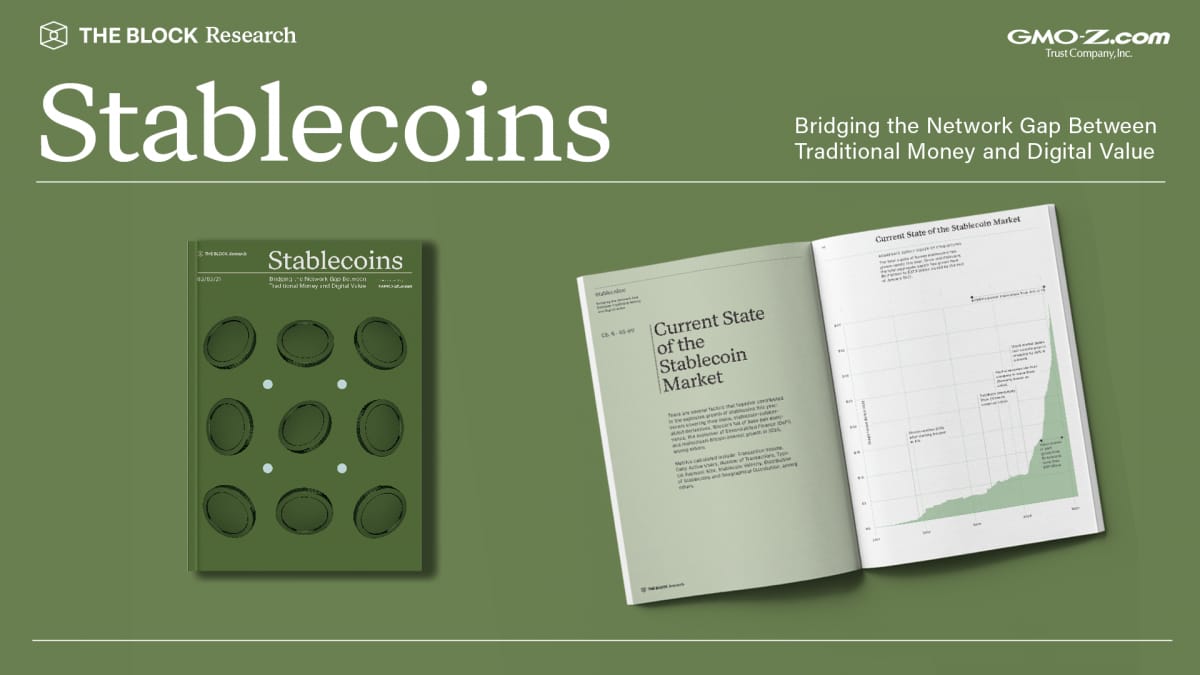 “Stablecoins: Bridging the Network Gap Between Traditional Money and Digital Value” aspires to serve as a foundational text, for not only digital asset practitioners and enthusiasts, but financial services professionals and global policymakers as well. Although some progress has been made over the past several years toward linking the traditional financial system and the burgeoning digital assets ecosystem, there is still significant work ahead for all stakeholders.
The Block Research believes that independent research and quality content backed by data can help cut through the noise of the Information Age: put simply, the world today is drowning with information, but starving for wisdom. This ten-part research report, commissioned by GMO-Z.com Trust Company (GMO Trust), examines one of the fastest growing digital money innovations of the next Web: stablecoins.

Before discussing stablecoins, Part I lays out the foundational principles of modern money, including its three defining functions, the importance of third-party commitment power, the three primary categories of money, and each category’s relation to economic groups in a two-tier monetary system. The principles of money serve as a framework for understanding alternative forms of value and exchange, most notably electronic money (e-money), which first came to prominence during the years of Web 1.0 (1990s to early 2000s). Part II reviews major stakeholders’ interpretations of e-money throughout that time period, providing a scope for pragmatically viewing stablecoins.

With the rapid expansion of the stablecoin market, the interplay between novel forms of digital money and the two-tier banking model is once again at the top of global authorities' agendas. Similar to e-money from Web 1.0, the exact definition of a stablecoin is currently in the eye of the beholder, mainly due to the lack of formal laws and standards today. Part III introduces several key terms, discusses the purpose of stablecoins and lists some of their benefits and challenges.
Part IV covers the three main stablecoin categories that exist today — collateralized by fiat, overcollateralized by crypto-assets, and non-collateralized (algorithmic). Each type’s stabilization mechanism trade offs that are highlighted in case studies exploring Reserve, Terra, Basis and Ampleforth.

From there, the current approach to stablecoin regulation, as well as compliance, is examined in Part V. Twenty-Four years after the G-10 started studying e-money developments, the G7 Working Group on Stablecoins released a landmark report on global stablecoins. The Financial Stability Board (FSB), US Office of the Comptroller of the Currency (OCC) and the Financial Action Task Force (FATF) have also weighed in over the past few years. As for regional specific regulation, the Regulation on Markets in Crypto-assets (MiCA) and the STABLE Act Proposal bring plenty to the stablecoin oversight debate.

Next, Part VI uses data to graphically display the current state of the stablecoin market. There are several factors that together contributed to the explosive growth of stablecoins this year: miners covering their loans, stablecoin-collateralized derivatives, Bitcoin’s fall of base pair dominance, the explosion of Decentralized Finance (DeFi) and mainstream Bitcoin interest growth in 2020. Metrics calculated in this section include: Transaction Volume, Daily Active Users, Number of Transactions, Typical Payment Size, Stablecoin Velocity, Distribution of Stablecoins and Geographical Distribution, among others.

As of February 2021, there are currently about 50 different live stablecoins issued by 25 different companies, all of which are listed in Part VII. The total combined supply of these stablecoins is about $38.5 billion. Of the total supply of $38.5 billion, 99.5% is pegged to the U.S. dollar while only 0.3% is pegged to the EUR and another 0.1% to the KRW. One major reason is that the U.S. dollar is the most widely held reserve currency, representing 61% of international foreign currency reserves. Case studies in this section explore Tether, USD Coin (USDC), Paxos Standard (PAX) and Diem (Formerly known as Libra).

Aptly titled, the most desired quality of a stablecoin is unsurprisingly stability. Stability is a function of primarily two factors: stabilization mechanism and liquidity. Part VIII calculates secondary market stability for listed stablecoins to determine which ones diverge the least from their pegs. Results show that the majority of stablecoins are used for trading, but other future use cases are considered. A case study also explores one of the most successful crypto-collateralized stablecoins, MakerDAO.

Part IX concludes the report body with an outlook on future developments and anticipated directions for the stablecoin ecosystem. Stablecoins have the potential to eventually be widely adopted by non-cryptocurrency users for remittances and payments. So far, the stablecoins with traction have been issued by cryptocurrency-centric companies and projects. Throughout 2021, this will drastically change with more traditional companies expected to launch their own stablecoins.

GMO Trust already kicked things off by revealing its JPY-pegged stablecoin (GYEN) and USD-pegged stablecoin (ZUSD). This trend will accelerate with Diem’s progression toward issuing both single currency stablecoins and the multi-currency Diem Coin. Lately, PayPal’s stablecoin is rumored to be announced in Q1 in cooperation with Paxos — if these rumors prove to be true, then the stablecoin floodgates could open.

As a bonus, the report’s Appendix, Part X, delves deeper into two examinations of e-money from the years of Web 1.0 — a 1996 Bank for International Settlements (BIS) report and a 2000 London School of Economics (LSE) working paper by British economist Charles Goodhart — document potential implications that electronic money developments will have for central banks.

Professor Goodhart’s LSE paper made some eerily predictive monetary statements 20 years ago that are starting to play out today. One being a scenario in which the central bank could optimize the Treasury Department’s ability to absorb fiscal costs, drawing parallels to current ideas of Modern Money Theory (MMT). Goodhart also wrote that the debate on central bank independence would stay muted as long as inflation targets were hit. Fast forward to the decade following the global financial crisis, and the Federal Reserve struggled to consistently meet its 2% inflation target.
© 2021 The Block Crypto, Inc. All Rights Reserved. This article is provided for informational purposes only. It is not offered or intended to be used as legal, tax, investment, financial, or other advice. 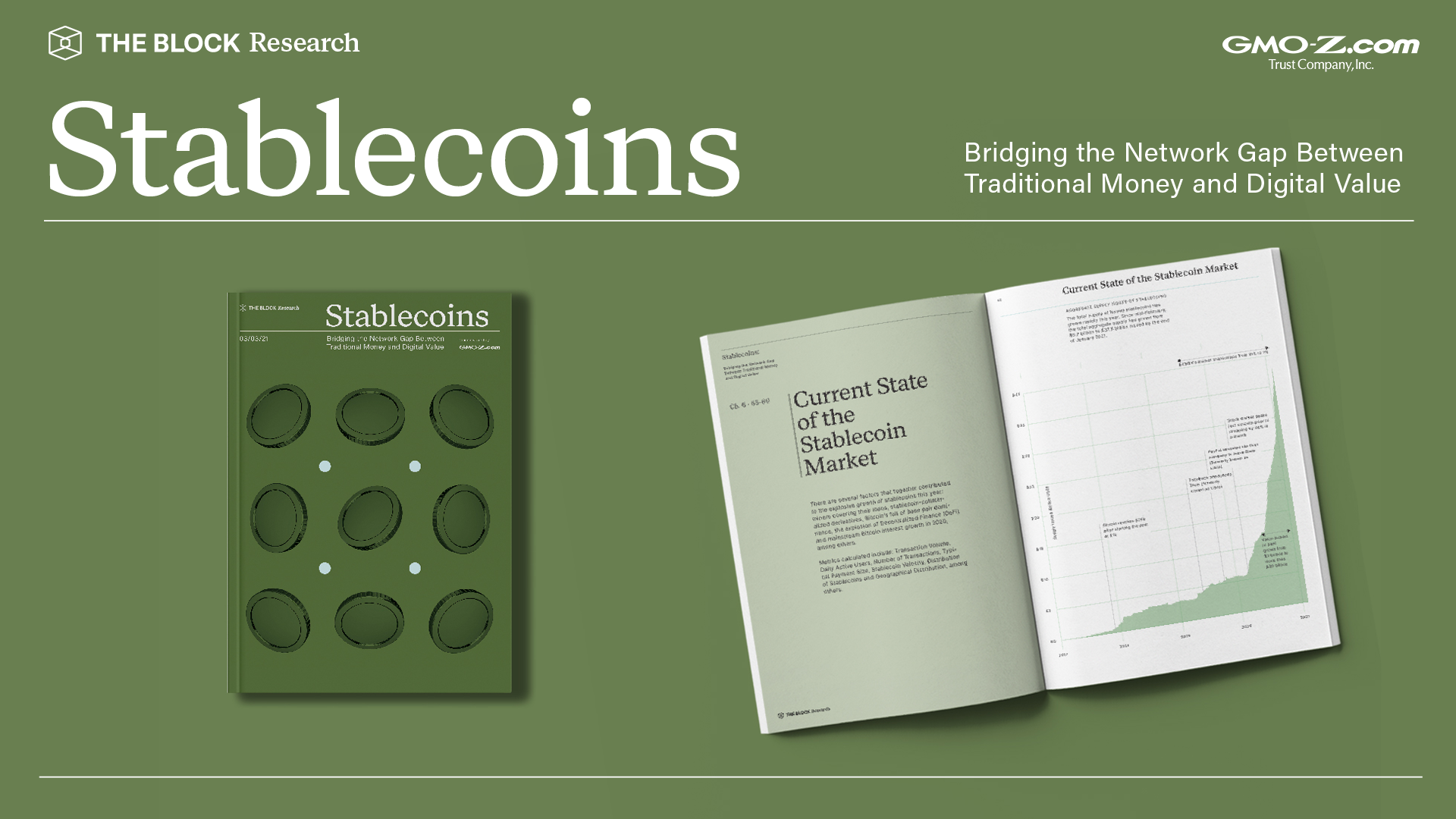 Stablecoins: Bridging the Network Gap Between Traditional Money and Digital Value — Brought to you by GMO Trust

This ten-part research report, commissioned by GMO-Z.com Trust Company (GMO Trust), examines one of the fastest growing digital money innovations of the next Web: stablecoins.

What is a stablecoin?​ 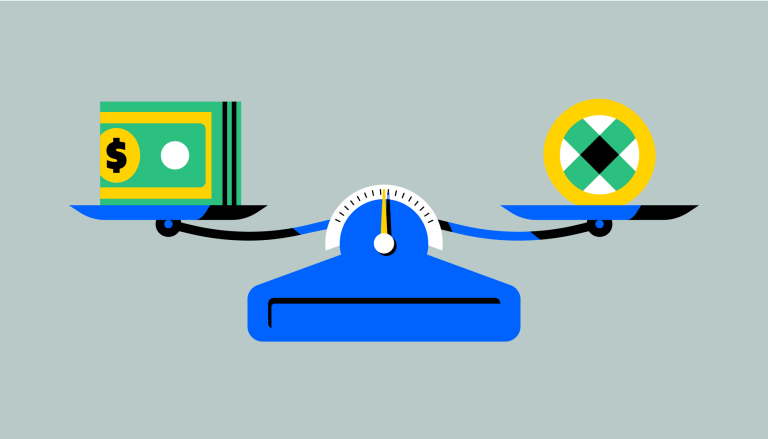 Definition
A stablecoin is a digital currency that is pegged to a “stable” reserve asset like the U.S. dollar or gold. Stablecoins are designed to reduce volatility relative to unpegged cryptocurrencies like Bitcoin.
Stablecoins bridge the worlds of cryptocurrency and everyday fiat currency because their prices are pegged to a reserve asset like the U.S. dollar or gold. This dramatically reduces volatility compared to something like Bitcoin and results in a form of digital money that is better suited to everything from day-to-day commerce to making transfers between exchanges.
The combination of traditional-asset stability with digital-asset flexibility has proven to be a wildly popular idea. Billions of dollars in value have flowed into stablecoins like USD Coin (USDC) as they’ve become some of the most popular ways to store and trade value in the crypto ecosystem.

Why are stablecoins important?​

The USDC stablecoin, for example, is backed by dollar-denominated assets of at least equal fair value to the USDC in circulation in segregated accounts with US regulated financial institutions. Such accounts are attested to (i.e. verified publicly) by an independent accounting firm.
Like many other stablecoins, USDC currently operates on the Ethereum blockchain. Stablecoins are free from the volatility of non-pegged cryptocurrencies, while inheriting some of their most powerful properties:

What can you do with stablecoins?​