The European Central Bank’s stimulus package isn’t that bad after all.

Europe’s stocks and bonds unwound the previous session’s losses as traders warmed to ECB President Mario Draghi’s policy measures. Credit markets, the main beneficiaries of the program, extended Thursday’s rally and the euro weakened. Oil led commodities to a three-month high and supported emerging markets after China strengthened the yuan’s fixing by the most in four months. 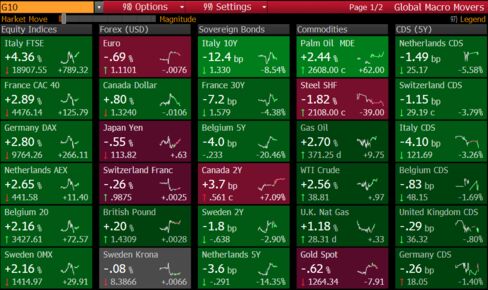 ECB stimulus lifts Italian stocks and bonds, weakens euro
Markets were whipsawed in the wake of the ECB’s policy announcement, which included a reduction in borrowing costs and an expansion of the central bank’s quantitative-easing to corporate bonds, before Draghi asserted that he didn’t see any need to cut interest rates further. Central banks remain key to the health of the global economy, with measures by the People’s Bank of China and next week’s U.S. Federal Reserve meeting likely to be closely watched.

“Yesterday’s moves were far too extreme.” said Teis Knuthsen, chief investment officer at Saxo Bank A/S’s private-banking unit in Hellerup, Denmark. “At the end of the day, the ECB delivered more than expected and is pumping a lot of money into the system.”

Spanish and Italian banks led the rebound in the Stoxx 600, while automakers also climbed more than 4 percent as a group, helped by the weakening euro. Deutsche Bank AG rose 7.2 percent after people with knowledge of the matter said it’s in talks with lenders to sell the last batch of its 1 trillion euros portfolio of complex financial instruments.

The Stoxx 600 ended up falling on Thursday, even as the ECB cut its key interest rates and expanded its bond-buying program. The Euro Stoxx 50 Index of the biggest euro-area companies moved more than 5 percent intraday, its wildest swing since August, and the most on an ECB day since 2011.

Gains in stocks weren’t limited to Europe as futures on the Standard & Poor’s 500 Index increased more than 1 percent, while the MSCI Asia Pacific Index added 0.7 percent. Equities in Europe and the U.S. are heading for their first weekly losses in four, while those in Asia are little changed.

“The ECB overdelivered, as we thought they would, albeit in a more complex configuration than we looked for,” Peter Chatwell, head of rates strategy at Mizuho International Plc in London, wrote in a note to clients. “The negative market reaction appears more linked to rate cuts being priced out. The market will get over this.”

That narrowed the yield difference, or spread, between Italian and German 10-year debt to 105 basis points, the lowest since Jan. 19, according to closing-price data compiled by Bloomberg.

The cost of insuring corporate debt against default fell to about the lowest this year.

The riskiest type of bank bonds climbed after the European Commission suggested that noteholders should get greater protection. That could eventually reduce the chances of weak lenders being forced to skip coupon payments on so-called additional Tier 1 notes because of low capital levels. The ECB will also start paying lenders to borrow from a four-year funding program. Gainers on Friday included Deutsche Bank and UniCredit SpA bonds, which were at the forefront of a selloff in risky bank debt earlier this year.

While the euro weakened Friday on renewed optimism over the ECB plan, it only pared about half of Thursday’s gain. The Bloomberg Dollar Spot Index was little changed, set for a 0.7 percent weekly loss.

In China, the yuan strengthened as much as 0.32 percent versus the greenback, briefly erasing its loss for the year, after the People’s Bank of China strengthened its daily reference rate by 0.34 percent. The magnitude of the PBOC’s change was a surprise, according to Khoon Goh, senior currency strategist at ANZ in Singapore.

The boost to the yuan also lifted the currencies of countries that export raw materials. Australia’s dollar approached its highest level since July, Canada’s climbed toward a four-month high, South Africa’s rand surged 1.3 percent and the Russian ruble jumped 2.6 percent.

“Supporting the Aussie was the PBOC’s” yuan fixing, “which weighed on the U.S. dollar against most major currencies,” said Elias Haddad, an exchange-rate strategist at Commonwealth Bank of Australia in Sydney.

Now that's the kind of reaction you'd expect from more stimulus drugs being injected into rigged markets. Is it the fed's turn to have another go at the counterfeiting merry-go-round? ...I guess that's after the rate hikes we were assured were coming this year.
Hypocrite says "If you don't hold it, you don't own it!" ...turns around and buys PM "shares" from JPMorgan.
"It is no measure of health to be well adjusted to a profoundly sick society." ~ Jiddu Krishnamurti
"None are more hopelessly enslaved than those who falsely believe they are free." ~ Johann Wolfgang von Goethe
“In individuals, insanity is rare; but in groups, parties, nations and epochs, it is the rule.” ~ Friedrich Nietzsche™
You must log in or register to reply here.
Share:
Twitter Share Link