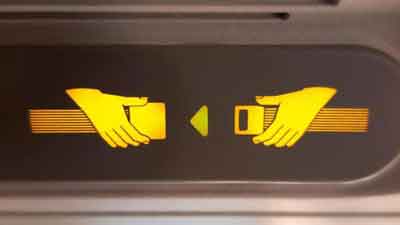 A few months ago, I drew attention to the fact that the Nasdaq was showing signs of increasing dispersion under the surface, a warning regarding the relative health of the uptrend. The following month, the Nasdaq Composite underwent a brief correction of about 8% (from high to low). It has since recouped those losses and then some but these breadth warnings have only continued.

Specifically, I am referring to a signal called the Hindenburg Omen that is triggered when the index sits at or near a new high and both the number of new 52-week highs and lows on the exchange rises above a certain threshold (here are the details). The indicator gets a bad rap as it was originally billed as a signal of an impending crash and has a terrible track record in this regard. The vast majority of signals are not followed by stock market crashes as they occur with far too great a frequency.

Still, I find that tracking the number of signals over certain time periods has a great deal of value at forecasting increasing volatility. The history of the Nasdaq Composite over the past couple of decades is a good example of this.

This week saw the index trigger its 13th and 14th Hindenburg Omens of the year. In the past, this degree of persistent dispersion has been a consistent precursor to corrections or bear markets in the index. 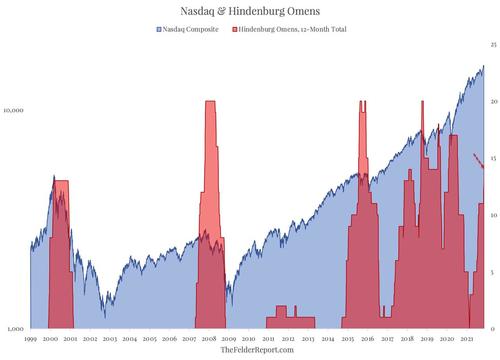 ​
In March of 2000, at the peak of the DotCom mania, we saw the index trigger its 13th omen and a bear market ensued shortly thereafter, as did another in 2007-2008, after 13 omens were triggered in October of 2007. It wasn’t until almost eight years later the running total hit 13 again, just prior to a pair of corrections in mid-2015 and early-2016. Then, in late-2017, we saw 13 omens eclipsed again heading into the “Volmageddon” episode in early-2018. 13 proved the magic number once again later that year just prior to the fourth quarter selloff that bottomed around Christmas. Finally, we saw 13 omens triggered again just prior to the Covid crash in early-2020.

So, at least from the history of the past twenty years or so, it would appear that when dispersion within the stock market reaches a certain level it is a pretty good warning sign of turbulence just ahead. Because that level was crossed again this week, it may be prudent to remain seated and make sure your seat belt is securely fastened, in a metaphorical sense, of course. 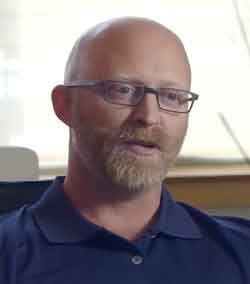 Jesse began his professional career at Bear, Stearns & Co. and later co-founded a multi-billion-dollar hedge fund firm headquartered in Santa Monica, California. Since founding The Felder Report in 2005 his writing has been featured in The Wall Street Journal, Barron's, The Huffington Post, MarketWatch, Yahoo!
Click to expand...

Hindenburg has give false signals in the past, but ignore it at your own risk.
Last edited: Nov 20, 2021
Just my 7 cents (2 cents after taxes and inflation).
E

I thought we had heard end of November was going to sell off. We are finally seeing a shakedown in energy, some commodities. I finally gave up on a gold miner that came back on me and was able to at least get out from underneath it. I love me metal but do not have patience for it.

Welp. By the look of today’s debauchery, he was right.

ZZZZZ said:
Hindenburg has give false signals in the past, but ignore it at your own risk.
Click to expand...

If you're (not you 5Z) not ready for anything by now it's probably already too late to catch up. As far as the stock market goes, she's a fickle, unpredictable little bitch and should be looked at as such and avoid contact whenever possible. Anyone who hasn't figured that out by now simply hasn't been paying attention
Last edited: Nov 26, 2021
I gotta get out of this place...
if it's the last thing I ever do!

But the question is, what else will it take down with it?
All words created by this poster are a work of fiction. Names, characters, business, events and incidents are the products of the poster's imagination. Any resemblance to actual persons, living or dead, or actual events is purely coincidental. In point of fact, the poster might very well be a work of fiction.

Hypocrite says "If you don't hold it, you don't own it!" ...turns around and buys PM "shares" from JPMorgan.
"It is no measure of health to be well adjusted to a profoundly sick society." ~ Jiddu Krishnamurti
"None are more hopelessly enslaved than those who falsely believe they are free." ~ Johann Wolfgang von Goethe
“In individuals, insanity is rare; but in groups, parties, nations and epochs, it is the rule.” ~ Friedrich Nietzsche™

Great question....of course, from the perspective of investments, it's never too late to stock up on more popcorn to sit by and watch the financial world crumble like the Twin Towers did on 911, right along with the rest of us.

I gotta get out of this place...
if it's the last thing I ever do!

when that valve blows, it's gonna be a bloodbath
...... it's all perverted!


anything / everything i post is opinion and open for debate, if debate can be found from some of my posts

ZZZZZ said:
Hindenburg has give false signals in the past, but ignore it at your own risk.
Click to expand...