The Fed Owned The Bond Market, Now It's Breaking It

The Fed Owned The Bond Market, Now It's Breaking It​

The Federal Reserve and other central banks took ownership of the bond markets during the pandemic with zero-bound rates. Now they are busy breaking them.

The bleak reality for investors is that bonds are at risk of turning into just another speculative asset, and a particularly focused area for speculation -- what the Fed will do next is becoming almost the only question that matters, rather than one of the key questions.

The fallout from all these central bank maneuverings is degrading the haven qualities of fixed-income securities and threatens to turn yield curves into mere noise, rather than reliable signals about real-world economics.

The meltdown across global bonds is truly epic and unprecedented. Whether you look at Bloomberg’s global aggregate bond index, which started in 1990, or at the U.S. gauge that goes back to 1976, the drops of more than 6% seen year-to-date exceed any full-year declines. Each index is well-nigh certain to suffer consecutive yearly losses for the first time on record. The picture is about the same if you just look at government debt securities. 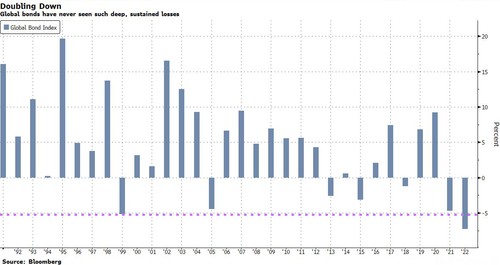 It could be easy to shrug this off as a fairly modest slide -- other asset classes like equities, commodities and junk bonds regularly switch between bull and bear markets. But that’s not the way bonds were supposed to work because as they decline, the increased yields they start offering would normally start to draw money back in to bonds -- especially because their role as benchmarks for risk-free rates means those rising yields start to place an increased burden on other assets.

An underappreciated dynamic in this year’s rout is the impact of central banks rushing to end quantitative easing and raise rates all at once as they realized they had stuck with pandemic-era stimulus for far too long. With the war in Ukraine underscoring expectations inflation will be the opposite of transitory, the previous taper playbook has been turned on its head. 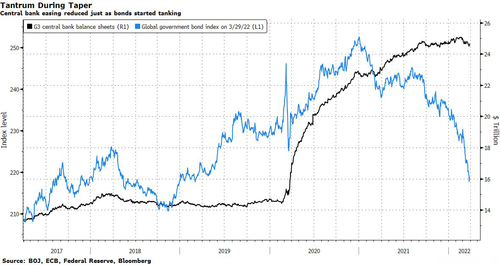 Treasuries for example have been hammered as the removal of the steady flow of demand from the Fed enhances the impact of triggers such as convexity, investment-grade corporate sales, and Japanese investors squaring positions into the March 31 end of the fiscal year. (The BOJ is playing its own special role in damaging global markets as it pulls out all the stops to stay easy in a tightening world).

Yields are spiking higher during and after the taper, unlike last decade when yields retreated on expectations that an end to QE would slow the economy.
Matters are only likely to get worse as the Fed pursues quantitative tightening, with more declines and more volatility looming. Heaven help investors and economists trying to read what bond pricing means once QT starts and further distorts already strained curves.

The new normal for bonds is that they become more and more about simply guessing at central bank moves, and less about real-world fundamentals because investors will turn elsewhere to express such views -- precious metals, various equity sectors, commodity baskets and so on.


The Fed Owned The Bond Market, Now It's Breaking It | ZeroHedge

ZeroHedge - On a long enough timeline, the survival rate for everyone drops to zero

www.zerohedge.com
Disclaimer: this post and the subject matter and contents thereof - text, media, or otherwise - do not necessarily reflect the views of the GIM2 administration.

Goldhedge said:
The Fed Owned The Bond Market, Now It's Breaking It
Click to expand...

What's new, GH? EVERYTHING they touch, they break !
Lost in Orygun.