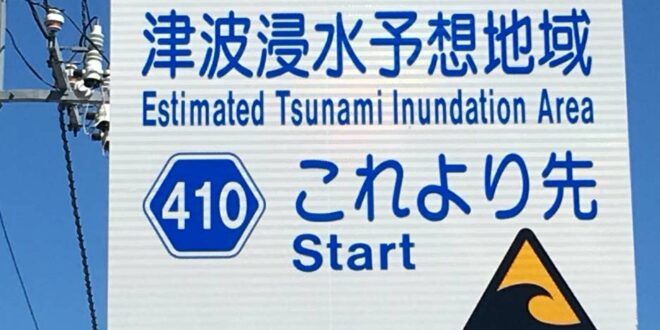 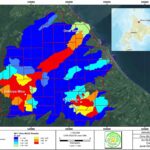 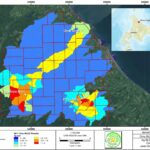 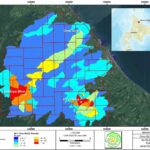 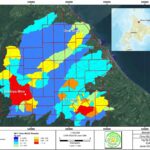 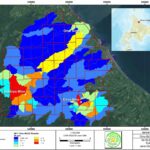 Figure 5: Sb
The colour-coded maps outline catch basins which are separated by hills or ridges. This makes life easy. If the area was flat or nearly so the dispersion of metals through stream erosion would potentially cover the entire area making it harder to interpret (but not impossible). They are best reviewed on the same sheet of paper. You see that the metals co-vary together as hoped for. The co-variance is never in lock-step for natural systems so not all the drainages are anomalous to the same degree. These plots tell me that there are at least 5 areas of interest. The three “hot zones” are around the Omu Sinter in the north, the old Hokuryu Mine in the southwest and the old Omui Mine in the southeast, but there are some more subtle anomalies in the far north, and between Omu and Omui.
Irving Resources Omui Property Soil Sample Results
Source: Irving Resources Ltd. 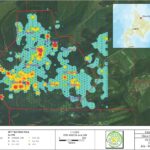 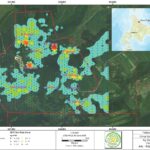 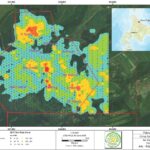 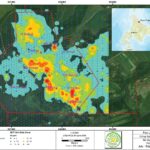 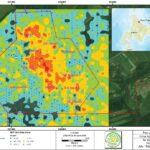 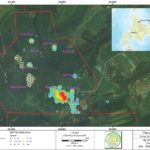 When the soil results are presented for Omui you can see that the hotspots for gold and silver are concentrated around the named locations, which are gold occurrences (or “showings”). No big surprise here and some of this may be old mine dumps or tailings. The really interesting plots however are for arsenic, antimony and selenium because the hot colours (yellow, orange and red) are indicating a NW-SE trend across the entire Omui concession (1.6 km). Even mercury is giving a hint of a NW-SE trend. This is powerful stuff, and when I reviewed it with my VP Exploration for Aurania, Jean-Paul Pallier, we were convinced that IRV were on to something. We ourselves have a cookie-cutter lookalike from Yawi and Crunchy Hill on our Ecuador Project, with the same anomalous suite of elements and broadly similar magnitudes of concentrations. In Irving’s case, arsenic, antimony and selenium are indicating “blind” mineralization, i.e. vein systems that themselves don’t come to surface but the geochemical dispersion halo does. Jean-Paul and I were anxious to see this firsthand, and so I contacted Akiko and took up her kind offer to visit the Project. The following are soil geochemistry plots from Aurania’s Latorre Zone (Crunchy Hill and Yawi Prospects) at the same intervals as the Irving plots from Omui. Note the scale bar of 6 kilometres.
Aurania Resources Soil Sample Results
Source: Aurania Resources Ltd. 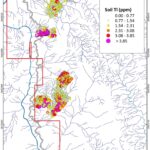 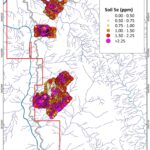 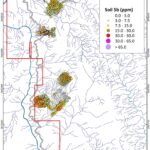 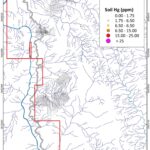 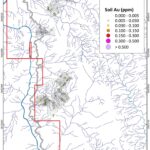 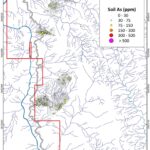 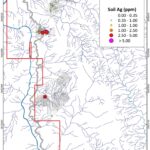 JP and I hit the ground in September, 2018, and we got to see all the Hokkaido showings. We had an excellent trip hosted by Quinton, Takeshi, Haruo and Akiko, but I must say that EVERYTHING was covered in bamboo, stinging nettles or poison ivy! There is virtually no rock sticking up anywhere, and geological mapping is a waste of time unless it is done immediately after the snow goes and before the vegetation takes hold. At one of the prospects next to a river was a freshly killed and half-eaten salmon. I am positive that we scared a bear off without knowing it. Brown bears are common in the area and can reach large size. 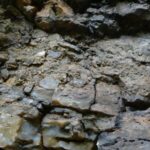 Siliceous sinter at the Omu outcrop. 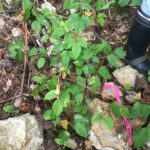 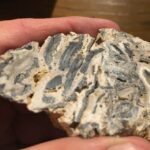 This is a slabbed piece of Honpi breccia with tiny pinpoints of electrum. Now in the Natural History Collection of the Museum of Lausanne.
First stop for us was the Honpi Prospect, which was a couple of shallow narrow trenches in a sea of metre-high bamboo scrub. The trenches were carved into sticky bright red mud and there was not much geology to see, but we were able to break off some samples of breccia with black ginguro bands. “Ginguro” is a mining term from Japan that has fallen into universal geology-speak and translates literally as “Black Silver”. It is usually very fine grained-electrum and silver sulphosalt minerals and when you see it, it means high grade.
Quinton told me that the Omu Sinter Prospect was something not historically examined. Driving on the outskirts of the town of Omu many of the houses have a large piece of white quartz as a prominent garden focal point. Curiosity got the better of Quinton one day and he knocked on a door and asked where it had come from. Quinton and Haruo located the outcrop a stone’s throw from the sea. I was told it runs about 1 g/t gold. It is comprised of laminated silica and breccias and in one place are preserved ripple marks.

Jean-Paul at the Omu Sinter. 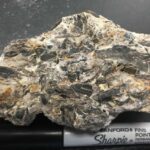 This is the piece from the Honpi Trench I sent off for assay. 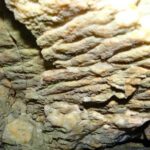 The Omu sinter forms a prominent cliff due to its hardness. Here is Quinton trying not to stick his head into poison ivy!
The sample I took from the Honpi Trench ran an amazing 935 g/t gold and 5750 g/t silver (with 14.95 ppm natural mercury). I sent if off for assay at ALS Chemex in North Vancouver, a recognized geochemistry laboratory. I had a piece of it slabbed and you can see little shiny pinpoints of electrum all over it. (It’s not easy to photograph!) I had the piece analyzed at the Museum of Lausanne in Switzerland, and it came back as electrum of composition 45.3% Au and 54.7% Ag with selenium-bearing acanthite (a silver mineral) and bromargyrite, which is a rare green silver-bromine mineral. I donated my sample to the Museum and it is now part of their collection. This is the highest gold assay of a sample I have personally taken, in my professional career!
Most recently I saw the Irving Gang again at the Resource Investment Conference in Vancouver in January, and at the PDAC in Toronto just before the Covid lockdown. In Vancouver they had some boxes of drill core on display from the Omu Sinter.


Vein intersection @185 metres depth, hole 19OMS-002. Irving website.
In the meantime, the first phase of drill holes had been put down on the Omu Sinter. No doubt Quinton was hoping for a blind discovery of high grade beneath the sinter as had been found at Fruta del Norte by Aurelian, and many years before by Homestake at McLaughlin in California. Essentially, he was drilling “blind” just to see the plumbing system beneath the sinter. Not exactly a “Hail Mary” exercise as Aurelian had done when it was on its last nickels, but pretty aggressive….and it worked out with an intersection of 0.32 metres of 118.5 g/t Au and 1410 g/t Ag showing ginguro bands in Hole 002 (press release May 6, 2019). Newmont Goldcorp came in with a placement of $6 million USD even before assays were released.
Newmont got in a huddle with the Irving folks and advised them to do a CSAMT survey (controlled source audio-frequency magnetotellurics) over Omu and Omui which was done last August. This was done to show electrically resistive (and presumably silica rich veins) in the subsurface to better target or “snipe” (Quinton’s term) at the mineralization. Presumably using the geophysical results Irving started to target drill at Omui, and on February 7th, announced hole 19OMI-010 with 21 significant Au-Ag veins. Newmont dumped more money in (February 13, 2020 Press Release). After a Covid hiatus, Irving got back to work and announced (June 25, 2020 Press release) partial assays from 20OMI-001, and descriptions and photos of core from 002 and 003, all drilled at Omui. Sumitomo Corporation closed a placement for $2.5 million USD June 29th and now we are in “wait and see mode”. They don’t call the diamond drill the “truth machine” for nothing!
I am waiting to see what a 22.6 metre intersection (205.8 m to 228.4 m) in Hole 20OMI-003 runs. I just finished a webcast series on Epithermal Gold-Silver which is in editing mode now where I spoke specifically on “Boiling Zones” (Module #6 – Stay Tuned!) Those crisscross structures you can see, particularly in the bottom row are classic lattice calcite replacement texture and evidence that geothermal fluids boiled. This is your typical “drop zone” for gold as the fluids are chemically destabilized by boiling. 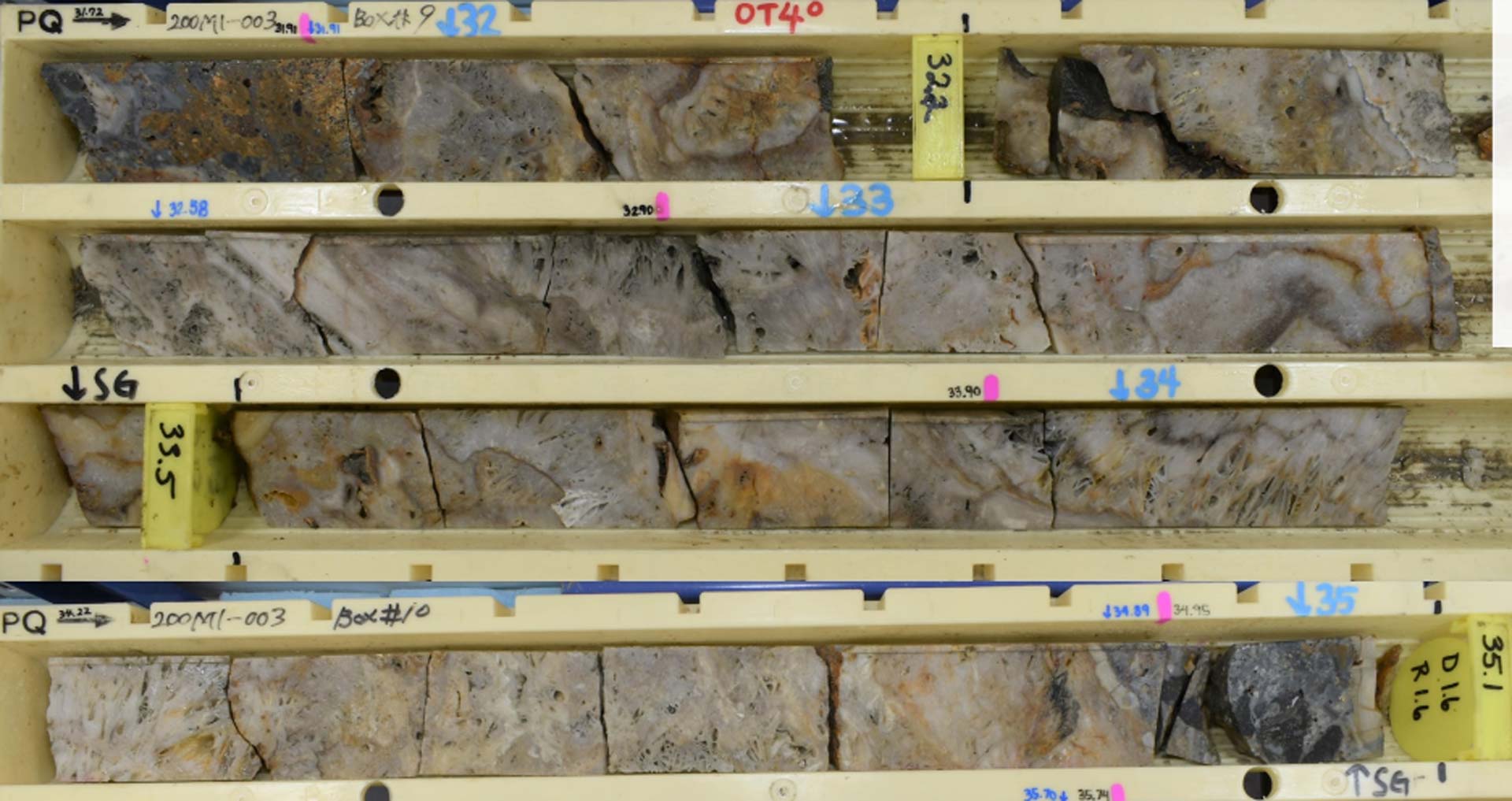 This is some of the juiciest drill core I have seen in a long time, and I guess the Sumitomo people think so too!
Philosopher George Santayana famously said, “Those who cannot remember the past are condemned to repeat it.” A friend of mine confused him recently with Carlos Santana (which made me howl!) Geologists learn from other’s successes; or they should! Aurania is taking a page out of Irving’s book and as soon as the Covid cautions are lifted we will be doing our own CSAMT survey to “snipe” at the mineralization. We know from the work done so far at Yawi and Crunchy Hill that the fluids trapped in veins at shallow levels “boiled”. It remains to be seen where the boiling took place in vertical space. Hopefully that is our “drop zone”.
And this is where I am going to pause the story……. 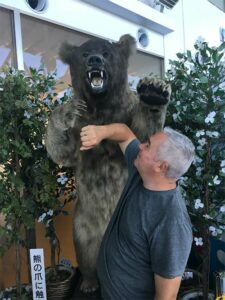 JP “Fighting off” a bear. In the Monbetsu Airport, Hokkaido.
For purposes of disclosure I am the Chairman and CEO of Aurania Resources Ltd., and a circa 50% shareholder. I am also a shareholder of Irving Resources Inc. (<1%). I am not employed by Irving nor acting as agent or P.Geo for them.
The data presented in the graphics of pathfinder element concentrations in soil at Aurania’s Yawi and Crunchy Hill targets was presented in the NI 43-101 report entitled “A Technical Review of the Lost Cities – Cutucu Exploration Project, Morona-Santiago Province, Ecuador” [http://aurania.com/wp-content/uploads/2020/02/Aurania-Resources-NI43-101-Technical-Report-2020.pdf], but was modified in this article to replicate the colour scheme that Irving used for its soil data graphics.