Was It The Buying Of Physical Metal That Drove Up The Price?

About That Silver Price Spike…Was It The Buying Of Physical Metal
That Drove Up The Price? 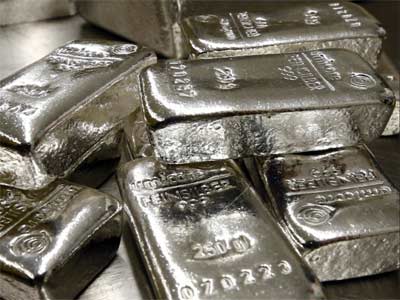 This is a rare sighting. Perhaps not as rare as Sasquatch or Nessie. But rare nonetheless…


All the usual suspects have been calling for silver to skyrocket. With some amusement, we have been watching ads from a guy known for savvy junior mining stock investments, who has been calling for gold to go up for a while. And recently, silver.


Anyways, the silver trend is obvious. Coming after a long bear market, with many bull traps aka short-lived spikes in the price, and now with central banks committing more Acts of Printing than ever before, and with gold already having gone up near its high in USD and breaking out to new highs in many other currencies, a bull market in silver would seem to make sense.


The technicals for silver look good, too.


Finally, it should be noted that the gold-silver ratio recently made an all-time (as in forever) high well over 120 to 1. This is an all-time low in the price of silver, as measured in gold (the proper way to measure it, really). So it is logical that silver should move up.


So what does Monetary Metals have to say? We could say, well, if a stock picker is going to publish macroeconomic calls, then perhaps we should start publishing our junior mining stock picks?


Or, instead of that, we should just show the chart that everyone wants to see. The high-resolution picture of the silver price overlaid with the silver basis. 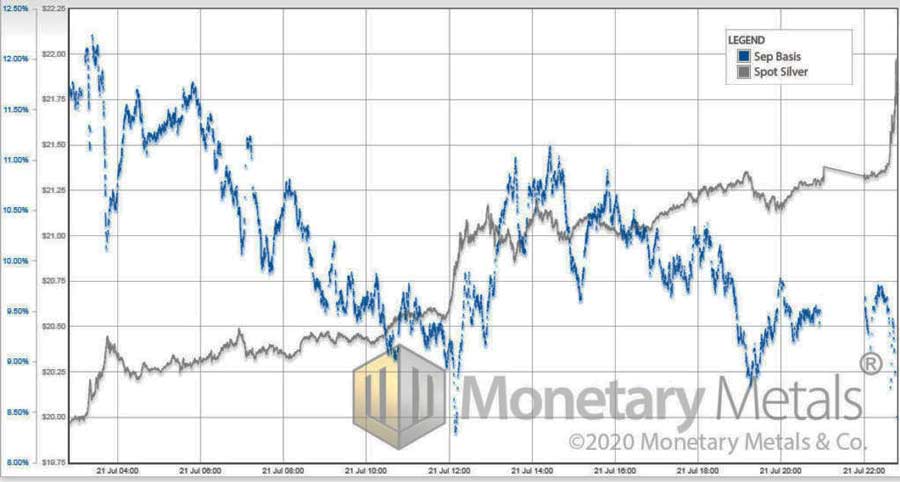 This is a rare sighting. Perhaps not as rare as Sasquatch or Nessie. But rare nonetheless.


Leaving aside all of our fancy theory as to why this indicates falling abundance—that is, there was less silver metal available to the market at the end of the day at $22 than there was at the start of the day at $20—this action shows something simpler and obviouser.


The price of spot moved up closer to the price of the futures contract (the futures price is still quite a bit higher than the spot price). This tells us that the buying which drove the price up so much was…


It is worth mentioning that, with the market makers still notable by their absence, the basis is very high and the move down was very big. This does not alter the above conclusion, that the buying was buying of physical metal. It just means that the absolute numbers of basis and change in basis should not be taken to mean the same thing as they would if they had occurred a few years ago.


This is a pretty good signal that a bull market may be returning to silver. Let’s watch the basis and price action closely and see how it develops, before we join the pack by taking a straight edge to a price chart starting at March and drawing a line up and to the right, to pick a price target.


Nomination for the Board of Governors of the Federal Reserve


We read the news today that Judy Shelton has been approved by the Senate Banking Committee. This means that the full Senate can vote whether or not to approve her.


She is not liked in many quarters in Washington. Unlike President Trump’s pick for the other vacant seat (Christopher Waller), the vote on Dr. Shelton fell along strict party lines.


The reason for the antipathy is that she has promoted heretical ideas, dangerous ideas. Ideas about gold, and about a gold-backed Treasury bond. She has said that the US should return to a gold standard (though, alas, she has more recently called for the Fed to cut interest rates).


Given the entire theory developed by Keith Weiner, and our very raison d’etre, we feel we should comment on the prospect of Shelton joining the Fed. We should also disclose that Keith knows Judy, and has discussed gold bonds with her.


Our opinion is that Dr. Shelton has some new and better ideas.


We make no prediction as to the politics she may encounter at the Fed. But there is a more fundamental problem. The Fed is a central planning agency. Its nature cannot be changed. And there is no good way to do central planning. There is no such thing as a good central plan.


Some might criticize us, and demand if we don’t care to minimize the harm inflicted by the Fed. Isn’t it better to have good people at the Fed, than bad?


To which we reply: we trust the Fed well enough to keep working towards its true purpose. Forget GDP and inflation and unemployment. The job of the central bank is to enable the government and its cronies to borrow more, more cheaply. And this includes keeping them solvent. We trust the Fed will do what it needs to do to the quantity of dollars and the interest rate. And to buy whatever securities it needs to buy, to stave off the insolvency of any financial intermediary it cares about.


In other words, it will keep the capital-consuming machine going as long as it can, heedless of the consumption of capital. This will hold true with or without Dr. Shelton.


We wish her the best, but this does not alter our view of the Fed one iota. Or our mission to revive the gold standard, by paying interest on gold and silver to everyone.

Dr. Keith Weiner is the president of the Gold Standard Institute USA, and CEO of Monetary Metals. Keith is a leading authority in the areas of gold, money, and credit and has made important contributions to the development of trading techniques founded upon the analysis of bid-ask spreads. Keith is a sought after speaker and regularly writes on economics. He is an Objectivist, and has his PhD from the New Austrian School of Economics. He lives with his wife near Phoenix, Arizona.
​

Looks like physical premiums were out of balance with the market. I think the government wanted its supply cut instead of giving away 20%+ to middlemen.
You must log in or register to reply here.
Share: Twitter Link